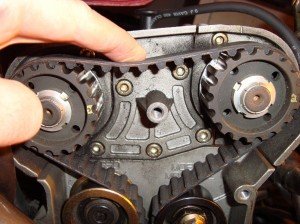 The timing belt of a vehicle plays a vital role in running the engine. Vehicle’s used to be equipped primarily with a timing chain, but now most import vehicles and many of the domestics are being manufactured with a timing belt. The manufacturer of the vehicle sets the mileage interval for the recommended replacement based on the life expectancy of that particular application. These mileage intervals vary greatly and the replacement time recommendation can be from 60,000 miles up to 105,000 miles. The replacement of that belt is one of the most important routine maintenance procedures that is often overlooked.

In the event of a timing belt failure the engine will stop running. You can crank the engine but it will not start or fire up. The vehicle will need to be towed to your trusted repair facility. There are two types of timing belt driven engines, one is considered a “free running or free wheeling” engine, the other is an “interference” engine. In both of these engines the timing belt transfers the rotation of the crankshaft to the camshaft(s). Camshafts actuate the opening and closing of the intake and exhaust valves. The valves allow air and fuel into the cylinder and allow exhaust to escape. While the engine is running the valves and pistons are constantly moving up and down at varying speeds, always in perfect sync, because of the timing belt. The difference between these engines is that an “interference” engine does not allow clearance between the valve at its lowest point and the piston at its highest point. If the timing belt fails and the camshaft and crankshaft get out of sync, and can allow the valves and pistons to make contact, this will cause severe damage. A timing belt failure in a “free running or free wheeling” engine will not cause severe damage, but will still leave you stranded.

Visual inspection of the timing belt is difficult. The belt is concealed under a cover for the protection of the belt. The timing belt is constructed of rubber and nylon belt and has square cogs on the inside of the belt, this is a different design than a drive belt. It usually does not show many signs of wear and cracking. When it fails it is usually because the belt separates, causing some of the cogs sheer off leaving flat spaces on the belt. We highly recommend that the replacement of the timing belt is performed at the mileage interval that the manufacturer of your vehicle has deemed it necessary. Coolant or oil contamination can compromise the integrity of the belt, causing an earlier failure or necessitating an earlier replacement requirement.

If you have a vehicle that has an engine equipped with a timing belt, make sure that you are aware of the recommended mileage interval for the replacement of the timing belt. You can refer to your owner’s manual or contact your trusted repair facility if you have any questions or cannot find the information. The timing of your engine is critical, keeping it maintained properly will be more cost effective, than fixing the failure.